Agave montana ‘Blue Ocean’ is a rather spectacular agave with pale blue to grey leaves their margins adorned with vicious raised spines leading to a long purple black terminal spine at the end of each leaf. The effect is enhanced further with each leaf being indented by an impression of the leaves formed around it as it developed in the central growing point creating a beautiful textured shadow effect. Agave montana ‘Blue Ocean’ is a product of breeders in the United States and reports show that it should be hardy to at least  minus 5 celcius given perfect drainage.

For us agave collectors here at Big Plant and many of our fellow agave fans there is some suspicion about the true parentage of this special plant. Agaves naturally are quiet promiscuous , flowering and cross fertilising commonly in the wild. Agave montana  grows on rocky hills and mountian slopes often near a similar agave,  Agave gentyii leading to natural hybrids so who knows. We do know that Agave montana ‘Blue Ocean’ is very beautiful but as to it’s true identity the jury’s out.

As with all gave worth growing outside in the U.K unless you have a very mild or dry micro-climate I always recommend building a roof over the top of treasured agave plants in winter. Simply hammer in 4 stakes around the agave a fix a clear plastic ‘roof’ onto the top of each stake above the agave leaving the sides clear allowing wind to pass through the leaves. Alternately we recommend growing in a pot in full sun from April to the end of October depending on the weather and moving it to a greenhouse, conservatory or even shed for the winter where it can have protection from freezing and wet. No watering will be needed from November to March. 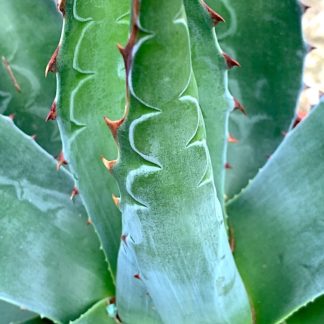