Agave parrasana ‘Meat Claw’ is ferocious selection of the ever popular ‘Cabbage Head Agave’ one of the most outstanding smaller agave species worth growing outdoors here in the U.K. The densely packed leaves are armed with raised hooked thorns along each the leaf edge with a long terminal spine at the tip which when young are a deep wine red. The leaves themselves are a bluish grey-green and are indented with the shadow of the leaf formed next to it as it developed in the growing point creating a wonderful textured bicolour effect. Whilst I’m not entirely enamoured with the name ‘Meat Claw’ you do kind of get the picture, the story goes that it was discovered growing as a chance seedling amongst a batch of young Agave parrasana at a nursery in Arizona. It was grown on and subsequently mass produced by micropropagation bring you the plants we have here. For us here the important information is that Agave parrasana is compact, rarely growing more than 35cm by 35cm, tolerant of frost and seems quite resistant to our damp winters.

As with all agave worth growing outside in the U.K unless you have a very mild or dry micro-climate I always recommend building a roof over the top of treasured agave plants in winter. Simply hammer in 4 stakes around the agave a fix a clear plastic ‘roof’ onto the top of each stake above the agave leaving the sides clear allowing wind to pass through the leaves. Alternately we recommend growing in a pot in positioned full sun from April to the end of October depending on the weather and moving it to a greenhouse, conservatory or even shed for the winter where it can have protection from freezing and wet. No watering will be needed from November to March. 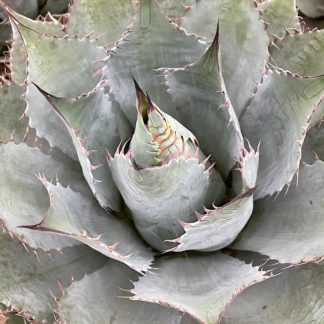