Agave parryi var. truncata known as the ‘Artichoke Agave’ due to its very dense and compact leaf formation creating the giant flower bud like appearance. Like all members of the parryi family the artichoke agave naturally grows on mountain slopes where winters are often cold and damp which is great news for us gardeners here in the relatively mild U.K. Agave parryi var. truncata is a real candidate for year round cultivation outdoors given a little protection from winter wet this agave will produce spectacular rosettes of glaucous grey leaves up to 90cm in diameter. If you are really lucky a tall, up to 4 metres, flowering spike may be produced holding sprays of yellow – orange flowers rich in nectar and much favoured in the wild by hummingbirds.

As with all agave worth growing outside in the U.K unless you have a very mild or dry micro-climate I always recommend building a roof over the top of treasured agave plants in winter. Simply hammer in 4 stakes around the agave a fix a clear plastic ‘roof’ onto the top of each stake above the agave leaving the sides clear allowing wind to pass through the leaves. Alternately we recommend growing in a pot in full sun from April to the end of October depending on the weather and moving it to a greenhouse, conservatory or even shed for the winter where it can have protection from freezing and wet. No watering will be needed from November to March. 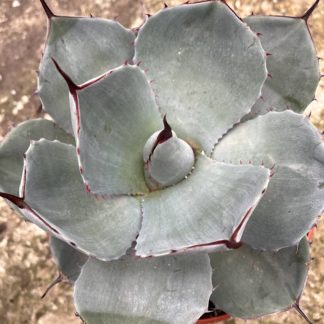