Agave parryi var. Huachucensis is a very attractive member of the Agave parryi group being probably the boldest form with large almost paddle like silvery grey leaves armed with dark purple black thorns along the leaf margins and sharp pointed terminal spines. Named after the Huachuca Mountains in Arizona where I guess it was first discovered Agave parryi var. Huachuensis does in grow in small colonies right across Sonora into Mexico. It is a high altitude species growing on cold arid slopes often amongst pines between 1500-2500 metres high, great news for agave lovers here as the ‘Huachuca Agave’ as it is commonly known tolerates freezing conditions well below minus 10 degrees C making it another great candidate for outdoor year round cultivation. One outstanding feature is the huge flowering spike produced on plants as young as 10 yers old which can reach 5 metres high the bud itself a reddish orange with the flowers opening yellow, quite striking almost alarming as the rosette of leaves below is rarely more than 80cm tall and wide.

As with all agave worth considering growing outside in the U.K unless you have a very mild or dry micro-climate I always recommend building a roof over the top of treasured agave plants in winter. Simply hammer in 4 stakes around the agave a fix a clear plastic ‘roof’ onto the top of each stake above the agave leaving the sides clear allowing wind to pass through the leaves. Alternately we recommend cultivation in a container positioned in a pot in full sun from April to the end of October depending on the weather and moving it to a greenhouse, conservatory or even shed for the winter where it can have protection from freezing and wet. No watering will be needed from November to March. 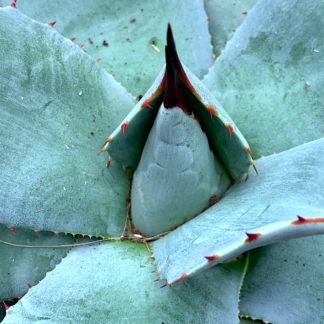