Chamaerops humilis is a spectacular and hugely versatile hardy palm for British Gardens often known as the Mediterranean Fan Palm, we simply call them Chamaerops – less of a mouthful and for most, easier to spell! Chamaerops are one of the few truly European palms, originally considered to have originated from the island of Crete. Nowadays Chamaerops can be seen growing all over the world, often naturalising into surrounding countryside. I have seen Chamaerops growing in exposed coastal conditions, through to dappled shady spots in the centre of towns. Unlike Trachycarpus palms, Chamaerops have tough, robust leaves and stems making them altogether more tolerant of exposure to wind. Chamaerops generally grow in a multi-stemmed formation and are best known as ‘bushy palms’, often growing as wide as they are tall. In the UK Chamaerops rarely reach more than three metres high and would take 20 or more years to achieve this. They respond very well to feeding and can be pruned hard each year to remove old or damaged leaves. The compact and bushy nature of Chamaerops, and the fact that naturally they can be found growing in poor, stoney soil, makes them ideal candidates for raised beds or container cultivation where their architectural form looks spectacular. I’ve also seen them growing in a slightly shady spot amongst Trachycarpus and bamboo in a rural jungle garden in southern England, again, to spectacular effect. In short, I would say that Chamaerops is the most versatile ‘hardy’ palm, it’s easy to grow as long as you don’t live in a particularly cold location and worth a try if you fancy a bushy palm tree. I’ve had them growing in my West Sussex garden for well over 15 years and have only resorted to protecting them from severe cold for a couple of winters. One thing I like about Chamaerops is that even if the leaves are damaged by the winter, in spring, new growth is rapid and fresh leaves are soon produced, particularly if you feed your Chamaerops. I recommend a seaweed based fertiliser both as a drench and as a spray on foliar feed, plus the addition each spring, of a good handful of pelleted poultry manure. 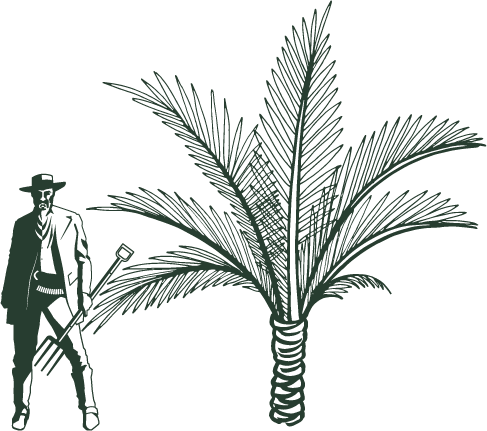